Back to Latest Thinking

How Leaders’ Moods And Emotions Impact Their Companies

Everyone watches the boss. People take their emotional cues from the top. Even when the boss isn’t highly visible—for example, the CEO who works behind closed doors on an upper floor—his attitude affects the moods of his direct reports, and a domino effect ripples throughout the company’s emotional climate. Careful observations of working groups in action revealed several ways the leader plays such a pivotal role in determining the shared emotions. Leaders typically talked more than anyone else, and what they said was listened to more carefully. Leaders were also usually the first to speak out on a subject, and when others made comments, their remarks most often referred to what the leader had said than to anyone else’s comments. Because the leader’s way of seeing things has special weight, leaders “manage meaning” for a group, offering a way to interpret, and so react emotionally to, a given situation.

But the impact on emotions goes beyond what a leader says. In these studies, even when leaders were not talking, they were watched more carefully than anyone else in the group. When people raised a question for the group as a whole, they would keep their eyes on the leader to see his or her response. Indeed, group members generally see the leader’s emotional reaction as the most valid response, and so model their own on it—particularly in an ambiguous situation, where various members react differently. In a sense, the leader sets the emotional standard.

Leaders give praise or withhold it, criticize well or destructively, offer support or turn a blind eye to people’s needs. They can frame the group’s mission in ways that give more meaning to each person’s contribution—or not. They can guide in ways that give people a sense of clarity and direction in their work and that encourage flexibility, setting people free to use their best sense of how to get the job done. All these acts help determine a leader’s primal emotional impact.

Still, not all “official” leaders in a group are necessarily the emotional leaders. When the designated leader lacks credibility for some reason, people may turn for emotional guidance to someone else who they trust and respect. This de facto leader then becomes the one who molds others’ emotional reactions. For instance, a well-known jazz group that was named for its formal leader and founder actually took its emotional cues from a different musician. The founder continued to manage bookings and logistics, but when it came time to decide what tune the group would play next or how the sound system should be adjusted, all eyes turned to the dominant member—the emotional leader.

Regardless of who the emotional leader might be, however, she’s likely to have a knack for acting as a limbic “attractor,” exerting a palpable force on the emotional brains of people around her. Watch a gifted actor at work, for example, and observe how easily she draws an audience into her emotional orbit. Whether she’s conveying the agony of a betrayal or a joyous triumph, the audience feels those things too.

How easily we catch leaders’ emotional states, then, has to do with how expressively their faces, voices, and gestures convey their feelings. The greater a leader’s skill at transmitting emotions, the more forcefully the emotions will spread. Such transmission does not depend on theatrics, of course; since people pay close attention to a leader, even subtle expressions of emotion can have great impact. Even so, the more open leaders are—how well they express their own enthusiasm, for example—the more readily others will feel that same contagious passion.

Leaders with that kind of talent are emotional magnets; people naturally gravitate to them. If you think about the leaders with whom people most want to work in an organization, they probably have this ability to exude upbeat feelings. It’s one reason emotionally intelligent leaders attract talented people—for the pleasure of working in their presence. Conversely, leaders who emit the negative register—who are irritable, touchy, domineering, cold—repel people. No one wants to work for a grouch. Research has proven it: Optimistic, enthusiastic leaders more easily retain their people, compared with those bosses who tend toward negative moods.

Emotions are highly intense, fleeting, and sometimes disruptive to work; moods tend to be less intense, longer-lasting feelings that typically don’t interfere with the job at hand. Yet an emotional episode usually leaves a corresponding lingering mood: a low-key, continual flow of feeling throughout the group.

Although emotions and moods may seem trivial from a business point of view, they have real consequences for getting work done. A leader’s mild anxiety can act as a signal that something needs more attention and careful thought. In fact, a sober mood can help immensely when considering a risky situation—and too much optimism can lead to ignoring dangers. A sudden flood of anger can rivet a leader’s attention on an urgent problem—such as the revelation that a senior executive has engaged in sexual harassment—redirecting the leader’s energies from the normal round of concerns toward finding a solution, such as improving the organization’s efforts to eliminate harassment.

While mild anxiety (such as over a looming deadline) can focus attention and energy, prolonged distress can sabotage a leader’s relationships and also hamper work performance by diminishing the brain’s ability to process information and respond effectively. A good laugh or an upbeat mood, on the other hand, more often enhances the neural abilities crucial for doing good work. 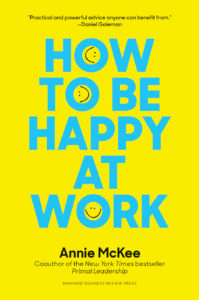 You Deserve to Be Happy at Work

Based on extensive research and decades of experience with leaders, How to Be Happy at Work deepens our understanding of what it means to be truly fulfilled and effective at work and provides clear, practical advice and instruction on how to get there―no matter what job you have.

Jul 11, 2017 Stress: The Happiness Killer at Work Read More
Dec 11, 2015 How to Free Your Innate Creativity Read More
May 21, 2018 Talking Without Words: How Subtly and Observation Can Benefit Leaders Read More